The only way is up

As the second quarter gets into full swing, its feels like for some there is more work to be done than when we started, despite best efforts. Whilst there were always going to be headwinds with persistent inflation requiring an end to the inaction of central bankers, growth is now also being questioned. Downside risks persist as highlighted last week by both the IMF and the World Bank. Since January the IMF has reduced global growth projections by 0.8 and 0.2 percent respectively for 2022 and 2023 to 3.6% for both years. This also assuming conflict does not escalate further, and central banks do enough to contain inflation (at the expense of expansion). Rhetoric from those in charge of monetary policy in the most advanced economies, with the luxury of high levels of employment (thankfully), is now squarely on taming prices, in full knowledge of the impact this might have on GDP in the near term. Off the back of conflict and snowballing price rises, global stocks are not having the start they had wished for (some core indices below, data from Bloomberg LLP).

Sentiment at the European Central Bank has finally shifted. A relief no doubt for all those that have suffered at their mercy for the best (or arguably worst) part of a decade with negative rates eroding actual cash balances in nominal terms, and not just when adjusted for inflation. The view that the drivers of price increases were different for Europe and temporary in nature has proved to be false, with annualised inflation expected to have risen from an already rather painful 5.9% in February to a final (annualised) March print of 7.5%. Unsustainable, painful, and persistent, it must now be dealt with. Market expectations (disclaimer alert — the market can get carried away) have also moved and swiftly with hikes coming several times this year and an implied rate by year-end that is positive! Our issuers are not immune to this, and we are seeing more products in positive territory and whilst levels have been fluctuating the trend is in one direction.

The IMF gave with one hand and took away with the other where the UK was concerned. Real GDP (on a percentage basis) is expected to pip global output to the post at 3.7% for 2022. It all gets rather gloomy though when looking to 2023, where Blighty gets the wooden spoon as the slowest growing economy in the G7 for 2023 at a rounding error of 1.2%. Whilst better of course than the sharp pandemic era contraction, the drivers of inflation and the ability for the economy to grow its way out of debt does not look to be on the cards just yet. This is also backed up by domestic data from the ONS as graphed below. 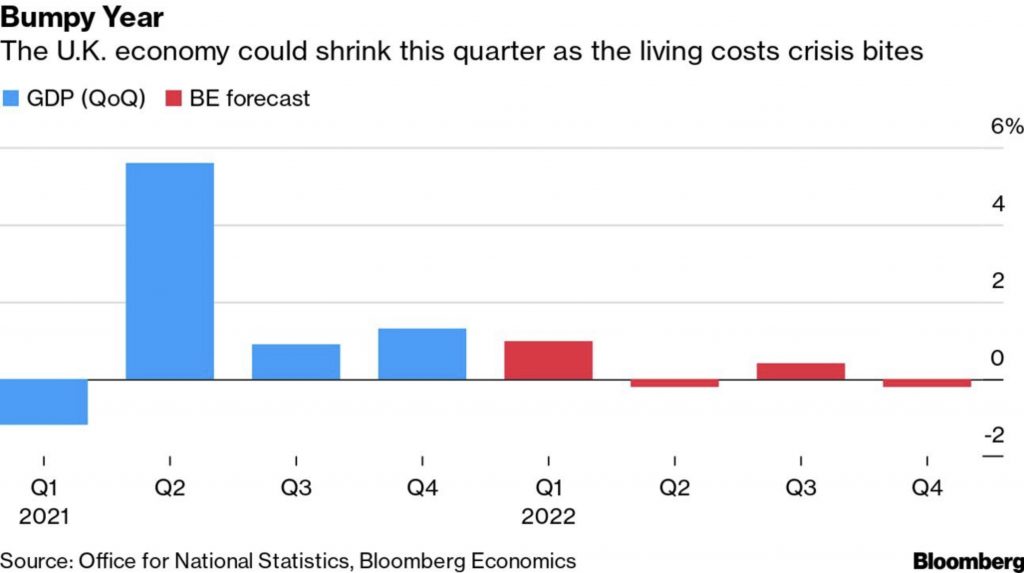 The next central bank meeting is scheduled for May 5^th^, where an increase is all but done, the curve now less steep and having been overtaken by the US with 0.25% the most likely outcome, although there are those that are placing stakes on a larger increase which is certainly not out of the question. As we know though, the Bank does like to come across as measured, and would not want to be too aggressive with a backdrop of a broader slowdown, in the author’s opinion (the author is a net borrower!). The Bank of England’s meetings do look to give the gift of approximately one hike per meeting to the end of the year, with an implied rate of around 2.25% by Christmas. At least there will be something for savers, and investors in FTFs!

The United States has seen one of the most rapid shifts in future interest rate expectations in decades frankly. The curve has not only steepened with the expected final high of this rate cycle that has now kicked off potentially exceeding 3%. It has become clear that the Federal Reserve is behind on its fight against inflation, with the next three meetings potentially bearing significant fruit of 0.5% per meeting! Professional interest rate traders are seeing a target (benchmark) of 2.75% as of Monday morning. There was even speculation that the May 4^th^ meeting would give rise to the most extreme single tightening in almost three decades — a whopping 0.75% increase. Voting members have since talked such extravagance back down. The economic machine that is America is projected to lead the G7 pack both this year and next.

To close, a small word of caution. We are exiting a period of extremely low rates and unprecedented levels of fiscal and monetary support. Economies far and wide have suffered scarring from the pandemic, and it continues to affect supply chains as China persists with its policy of shutdowns, affecting global supply chains and thus of course pricing. As rates go up, there will always be those for whom the burden to service debt becomes too much, in particular those dependent on floating rate structures or needing to refinance significant proportions of debt. It is also unknown what impact quantitative tightening will have and this appears little (and perhaps under-) discussed, in part as it is less headline grabbing. Its impact though could well be more significant, with central banks potentially needing to adjust policy to ensure a smooth path higher. One thing is for certain though despite all this, the only way for rates is up.