We already seem to find ourselves following results from the third quarter. Of particular interest is always how the financial sector is performing.

The good news here is that of the major names reporting to date, whilst revenue has slipped from that stellar Q2 where trading desks enjoyed the volatility, net income has blown through the roof in some instances. Much of this is down to the rather large reduction in provisions being set aside to deal with any potential credit fallout off the back of declining revenues in many parts of the corporate world. Consumer and business consumption and investment both remain muted in the western world, in particular with further measures once again being taken. Things have not been as bad as originally predicted, or at least not as quickly (almost unlimited government support in the early days quashed any short-term effects). As tends to be the case, we heard from the big US names first, with the Europeans and commercial banks following suit. Revenue continues to come from trading activity. Of those having reported drag is evident in the consumer arms as well as advisory (although I would expect this to change). We shall know more in the coming weeks with regard to those more heavily exposed to the real economy and shall keep our readership informed. Below a snapshot of Q3 performance, taken from individual bank reports.

It seems as though every week new records are set and, the land of the Euro is no exception. More than once over the past sessions we have witnessed record lows in the inter-bank funding market. 3 Month Euribor, one of several common measures to interpret the price of money that should include a credit component embedded within it, is now consistently printing below the ECBs target rate. In a normal world, this doesn’t make any sense – credit risk should carry a premium. But an abundance of money and a scarcity of homes for that money to be placed can lead to unintended consequences that don’t necessarily translate into better outcomes for the real economy.

Reports from our sales force also reflect the continued deterioration in deposit rates, and one only need to look at the increasingly negative rates in money market funds which are now at rather erosive levels of between -0.50 to -0.80 and beyond.

In Sterling, another fortnight has passed along with the original deadline for an agreement on trade and the broader transition agreement between the UK and the EU. The uncertainty is not helping UK Plc, currently battling a rise in COVID cases and the inevitable restrictions on daily life to slow transmission rates. Coupled with the end of furlough, these headwinds have not gone unnoticed by the rating agencies. Whilst everybody in London was enjoying their last sociable pint before “Tier 2” set in, Moody’s announced that the UK is no longer worthy of its Aa2 status, rather Aa3 was more appropriate with pressure to the downside. Whilst this did not necessarily come as a surprise to many it is a reminder of where we find ourselves. Market reaction was muted, with the gilt curve hardly moving and GBP still floating around US$1.30 in FX markets. For those seeking the safe haven of UK Treasury Bills, returns (seems odd in the context of negative rates) are continuing to go further into negative territory at weekly auctions, and we are witnessing record lows in the secondary market with some paper offered as reassuringly expensive as -0.09%. Ouch. Looking at the effect various support packages have had on UK public finances to date as neatly mapped out below, it is difficult to argue against ratings action taken.

It is also worth mentioning that we have heard of at least one large corporate that is now being charged negative rates on their GBP cash holdings, forcing them to shift balances to less offensive homes. Another taboo broken, but how else can one even attempt to maintain margin.

The lack of product in Sterling has not gone unnoticed here, with further offerings coming down the pipeline representing the best risk-adjusted returns in todays’ market. Watch this space for more announcements soon.

State-side, with a looming election and an inability to agree on the shape and flavour of the next stimulus package, equity investors are likely to be on a bumpy ride until both are complete. For those of us in bond world however, next steps from the Federal Reserve are more important. Its revised inflation-targeting approach may well give room for higher prices coming faster, eroding the value of debt outstanding, but that still seems to be somewhat of a pipe dream. Lower for longer once again…

As a reminder of what this meant last time around, see below (using both the upper and lower bound, source: Bloomberg). Further stimulus will be agreed upon at some point, and will inevitably lead to the debt-printing presses to reengage which should be supportive of higher returns in money markets given that much of this issuance is likely to come in the form of treasury bills which will require digestion, pressuring non-government issuers to price more attractively to compete for allocation. 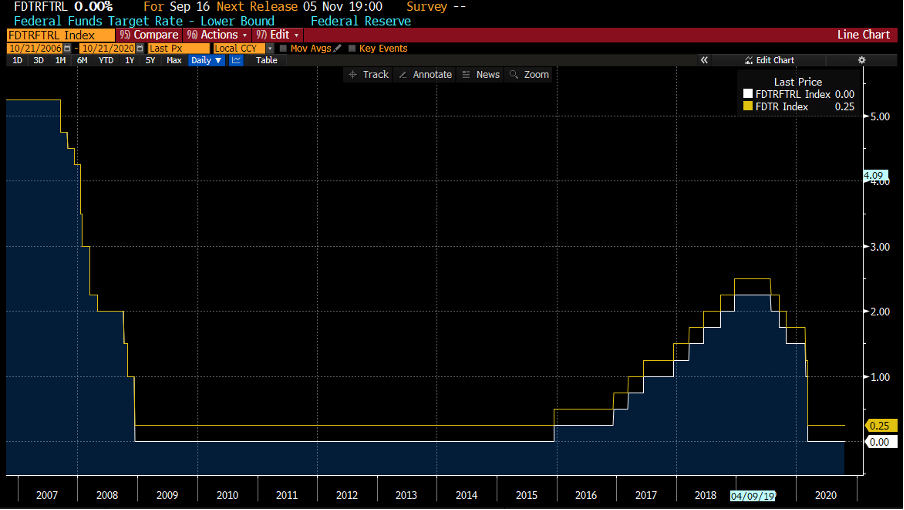 Our client base remains interested in, and to varying degrees invested in money market funds, so developments here should also be highlighted. Since our last musings there have been a number of reports indicating that further regulation is looming in this sector on both sides of the pond and channel. Maturity transformation in fixed income funds poses an intractable problem in times of crisis; and it seems like Central Banks may have finally grown tired of picking up the pieces. It is too early to speculate on what this might mean for European or US MMF investors but one thing that seems certain is that change is coming. We would naturally encourage clients to try to get ahead of the prospective changes and evaluate alternative options to minimise risk and maximise return on their excess cash holdings.

A more in-depth analysis on potential reform from the Bank for international Settlements below.

Randal K Quarles: What happened? What have we learned from it? Lessons from COVID-19 stress on the financial system (BIS)