Another month has already passed and in the meantime we have seen the three major central banks gift the market a further 75 basis points apiece. Truly exceptional times and telling of a global system that seems to have been asleep at the inflation wheel and hoping for “transitory” rather than taking decisive action to stamp aggressive price rises out early. Arguably a hike does little to fix the issues underlying the eye-watering moves higher. Even the simplest essential item, the Diet Coke, comes in at almost double prices observed this time last year with a variance of 45%ish on the price within a 200 metre radius of HQ. One might assume said vessel will at the very least be cold, but like much of the lighting in corner shops up and down the country, some fridges have also been turned off, resulting in a rather elaborate glass cupboard that also makes me feel mis-sold to.

At least that entirely useless metal, gold is lower. Perhaps there is some rational thought out there after all, or maybe folks are starting to wake up to the less-well publicised fact that the biggest discovery ever, was found in Uganda recently. At more than 320Bn tonnes versus an estimated current running total of just over 200Bn tonnes mined in our history, surely new supply moves the dial. With the price off just 8% YTD versus main stock indices globally being down 15-35% depending on the flavour, it feels like that market still has more to learn about supply and demand. Although, arguably, the cost to extract has far from improved. If it comes off too much, some rappers may well struggle to (please) stand up let alone take a bow. Perhaps the lesson is around elasticity, as our central banks are also finding.

Another traditional store of value is coming under pressure and globally. Unlike gold though, this one whilst also held by many, involves our old foe, leverage. With the most rapid increase in rates and from such low levels and affecting so many households, it is difficult to see how even with the most rose-tinted of views one can be bullish on the real estate sector. OK, in the UK we saw a complete meltdown in the mortgage market but that’s due to last month’s PM. Elsewhere though and in far larger markets it is coming or already being felt. Blackstone’s real estate investment fund, designed for the retail investor (what could possibly go wrong?!) is up 9.3% on the year, but showing signs of rate hike joy coming through at speed, with inflows off and redemptions up. What may surprise those not exposed to the US domestic mortgage market – rates have topped 7% for the first time in over two decades. Well above pre-GFC levels. ‘Where is this on a relative basis though’, I hear you rightly ponder? Well…it is more than double this time last year. Enough for me to sound bearish about? Need more? As the greatest outgoing, what level of wage growth might make this sustainable? On average between the years of 1960 to 2022, the annual figure comes in at 6.2%, so one might expect with all that is going on for the long run average to be below where we find ourselves today. But no. According to the US Bureau of Labour Statistics wages and salaries increased 5.1% year-on-year for the 12 month period ending September 2022. Factor in the cost of everything else staple to our existence and we are on a fast track to trouble. Anyway…a picture paints a thousand words and few do it better than The Visual Capitalist as below. 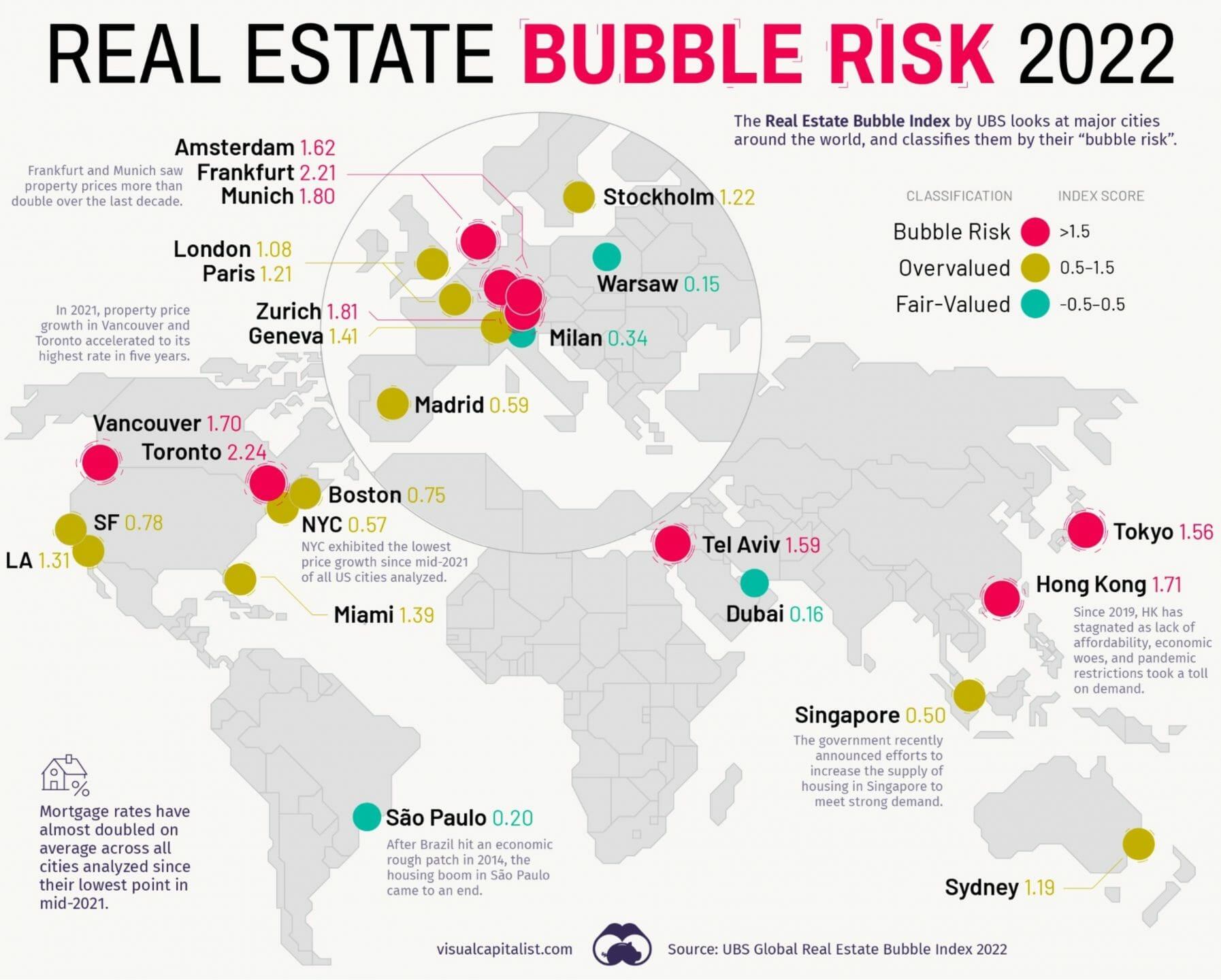 In this market, with these rises, we really have gone from “cash is trash” to “Cash is King”. So at least there is a silver lining for our audience. As we enter a period where credit has already begun what will be a great repricing (and rightly) at higher and continued spreads to the risk-free rate of government returns, it also makes being correct from a risk perspective all the more important. If something looks too cheap…Buy cheap buy twice would be fitting, unless of course the money is gone. Things will go pop as they always do in tightening cycles. Given the extremes we have come from and are well on the way to, to think it is different this time based on the last 10 years of data would be misguided at best. The ways it will differ are likely not to be good.

In Euroland the headline interest rate has once again risen, but what of the underlying markets for money? Well, as we roll into year-end and apply what we know about the abundance of liquidity, we have not all been immediately gifted the 75bps we expected. What is interesting is the ECB rightly acknowledging and taking action on the cheap money pumped in during the pandemic (the TLTRO). Below for reference the detail, but effectively we have already started to see market participants tying up cash for dates around the first repayment window creating slightly odd pricing distortions. Aside from impacting and rightly draining some of the needless liquidity, what else might occur? Well, if the S&Ps’ analysis is anything to go by, early signs are European and other banks are going to be taking a hit. On 3 November, one of the first European bank reviews took place post ECB announcement, and highlighted that ING would take a hit of EUR 350MM related to the “recalibration” of this program. Extrapolate out across the market and you start to get well into the billions.

Another “The FTF” another PM in the UK! Whilst change is inevitable, some consistency at the top is welcomed. The author at least is very pleased to see Mr Sunak take the seat. One might say well-deserved but then Prime Ministers are typically voted out and/or assassinated by their own party it seems. He has proven himself both in public office and the private sector and frankly the press in the UK is far too predatory, not helping the mood, to be polite. I do not see how it matters whether family members happen to be extremely successful. Surely the opposite should apply. Does success not breed success? Argh. It does feel as though Blighty has had more than its fair share of abuse. I’d like to just take one short moment to celebrate the fact that we have a Hindu Prime Minister, a Muslim Mayor of London, a Christian Chancellor of the Exchequer and a Jewish Deputy PM. Ethnic diversity is also improving and will help us come to a more balanced and moderate view.

Rates are higher and abundant liquidity in the front-end is continuing to put downward pressure on secured financing levels, along with the year end beauty parade of reducing balance sheet. Also interesting and less well publicised has been the successful beginning of the end of the great unwind. Quantitative easing has started in the UK ahead of both he Fed and WECB. Quite a feat given the prior week’s disruption. The Bank successfully sold £750MM gilts in the shorter end for auctions that in total were around 3.2x over-subscribed. The gradual reduction in holdings is helpful in giving the market something else it wants: more government collateral to be financed. Important to be balanced here, the Bank of England and Governor’s view of avoiding Armageddon and a prolonged recession are not things you want to hear. Let’s hope the protraction is at least “shallow” and folks keep their jobs.

Last but not least the Fed did what we all expected, the FOURTH consecutive 0.75% hike in a row. Feels very tech…move fast and break things. Not really what you want from a central bank though. Anyway, the next phase of this experiment is well and truly underway, once more unto the breach in the next meetings too apparently. Whilst the hikes are to become smaller, we were told without a shadow of a doubt that the terminal rate expected by the market was too low. Starting to feel like the reverse of “inflation is transitory” as the magnitude of disruption caused by consistently outsized moves hits everything everywhere. At least employment state side is holding up well and for now at least, recession averted. Usually the escalator takes a bit longer…below US rates post millennium bug. 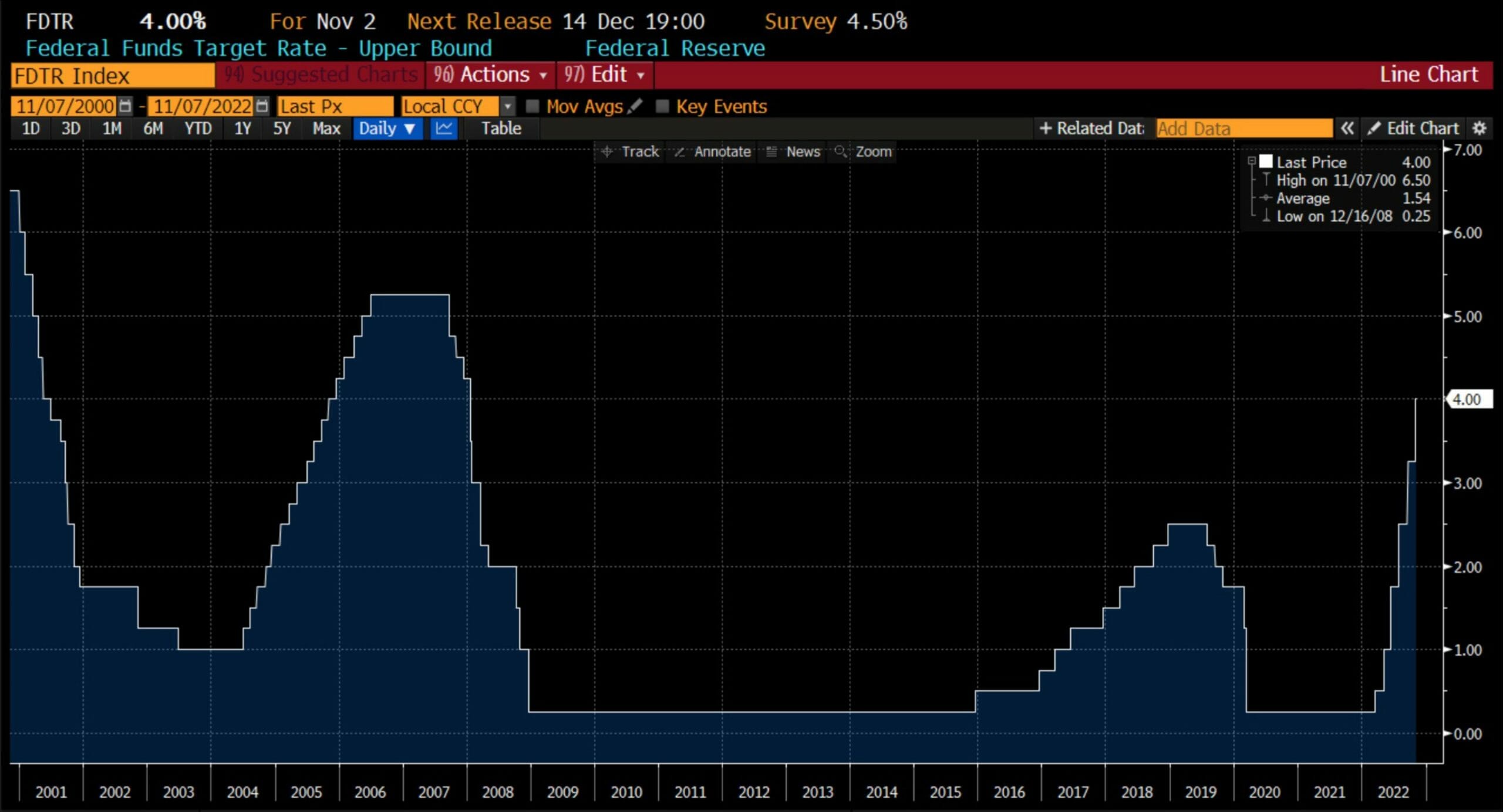 In the words of Maverick, ”he’s goin vertical”! Unfortunately later maneuvers end in “going inverted” swiftly followed by being given “the bird”.
https://www.ecb.europa.eu/press/pr/date/2022/html/ecb.pr221027_1~c8005660b0.en.html