From one crisis to the next

Since our last post it felt as though real progress had been made with an end to the pandemic in sight across the globe and spring just around the corner. On February 22nd this euphoria was brought to a grinding halt with the invasion of Ukraine. Our commentary will focus on the impact on markets, leaving the broader humanitarian disaster and associated difficulties to the experts of those fields. Needless to say though there will be no winners. We condemn the military action that Russia has taken.

Tumultuous would be one way to describe the price action, and across the entire spectrum of asset classes. We officially entered bear markets (20% off recent highs) for several of the leading European indices over the last couple of sessions. The squeeze is being felt not just in energy where supply and demand imbalances were already underway, but across a broad spectrum of commodities. Nickel has seen its largest ever price increase and by more than 100% in just a few short hours following an almighty short squeeze early this week. Last week saw a 40% rise in the price of wheat, a staple for a large proportion of the world’s population. Not good.

The inflationary pressures already being experienced that were starting to cause real headaches for central banks far and wide have now been exacerbated at a time when uncertainty and the potential need for greater support to the masses is likely required. The global economy is in real danger of entering a period of stagflation, where prices rise rapidly whilst growth remains stagnant. Needless to say, a very unpleasant place to be where those with the least are likely to suffer the most.

Across the board several themes have certainly already begun to emerge. Primary bond markets all but closed for a week, FX swaps almost impossible to price, whilst liquidity in money markets also suffered. All are yet to fully recover with appetite to lock in for longer being thin on the ground. The small silver lining is that one does get rewarded for doing so. Volatility remains elevated, interesting to see is how VIX (the fear index) in the Emerging Markets (VXEEM) basket of stocks has been overtaken by core Europe (V2X), and indeed by some margin as of Monday, graphed out below.

With the ECB meeting today, in a region not immune to the inflationary pressures experienced elsewhere, GDP came in right on expectations at 3.5% year-on-year Tuesday. Naturally inflation, growth and employment figures have taken a back seat though, with the central bank expected to maintain stimulus that was set to be wound down given the current crisis on its doorstep. Collateral shortages have been reported and the price to finance some specific bonds has remained elevated (as much supply has been absorbed into QE). However, the curve still shows signs of hikes to come, and just as with the other majors this has for now merely been delayed rather than priced out. We have seen several opportunities to finance in EUR that are attractive not just on a risk-adjusted but also outright basis for those that can lock in for longer tenors. In other big European news, detail is expected this week regarding the joint issuance of bonds on a potentially massive scale to fund both defence and energy projects. Could this be the beginning of a joint European armed forces?

Less than a fortnight ago but what feels like an eternity now, we were poised for a 0.50% move by the Bank of England along with an updated statement on sentiment towards what is persistent inflation. With price rises at 40-year highs and abundant uncertainty the role of the central banker and how best to help households and the economy is a tough balancing act. Many comment on the negative impact of higher mortgage payments, for example. One must remind oneself though that we are still very close to record lows. Additionally, the cost of inaction (as is often the case) could be far greater. Leaving price rises unchecked does not seem prudent. Perhaps we will see further support coming from the government as prices at the pumps and for merely keeping the lights on seems to be skyrocketing out of control. According to the Halifax House Price Index, property prices for the month of February have increased at the fastest pace since 2007 (on an annualised basis), reaching a new high yet again with the cost of an average home coming in just under £280,000 and at earnings multiples not seen since just before the Financial Crisis of 2008.

For the first time in many (many) years this week saw a very well rated financial issuer offer a whopping 2% for a 12 month deposit. UK Treasury Bill auctions have naturally become better bid, but we see a mild (for now) flight to quality, but for now mostly in the shortest tenor (1 month), indicating that perhaps the market feels that the conflict will not run much longer. Below auction results (average) across 1-, 3- and 6-month tenors from the beginning of the year. The credit spread has returned. 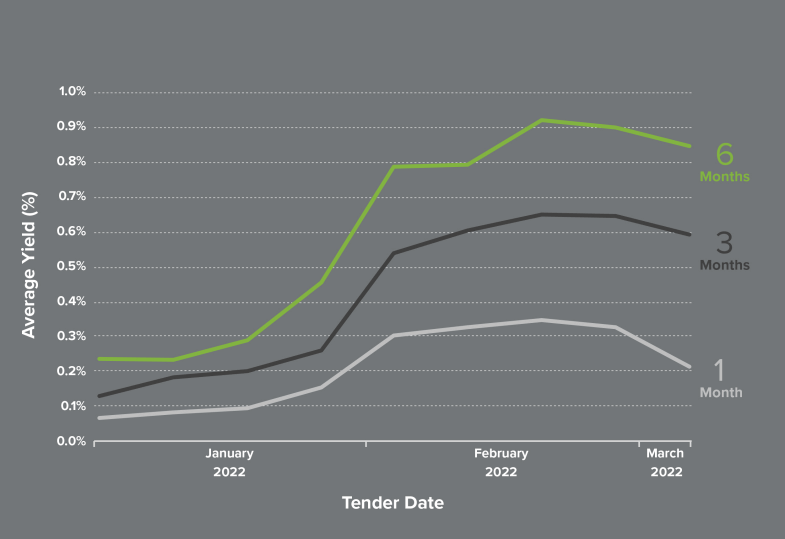 Whilst the flight to quality has taken hold in Europe, understandable given its proximity to the invasion and dependence (to varying degrees) on Russian oil and gas, it appears as though in the States the driving factor, for now at least, is quite different. Below, option-adjusted spreads are showing very different paths as the steepening interest rate environment in the US is feeding a selloff across all risk buckets as opposed to the dumping of junk and buying of quality in Europe.

Much like in £, the dollar curve remains priced for several hikes over the coming months, and for now at least the biggest moves have been pushing timing out rather than eliminating hikes over the next several months.