“It’s worth remembering that it is often the small steps, not the giant leaps, that bring about the most lasting change.”

A very sad day indeed for the world, losing one of the very best of us. There are few examples of a finer human anywhere and the loss of our beloved Monarch is truly a void that shall be felt for some time. Our thoughts and wishes are with the Royal Family. Rest in peace ma’am, we are forever grateful for your service. God Bless the King.

Summer has not shown the usual signs of slowdown this year at TreasurySpring HQ. Whilst governments and central banks have closed their doors to all but essential operations, markets have continued to buzz with life and sometimes even liquidity. Almost every day we seem to be setting new records on yields across all currencies as the world (ex-Japan) battles inflation, sometimes even without murdering remaining growth. Looking at the expected future path of rates, we have a way to go still from here… 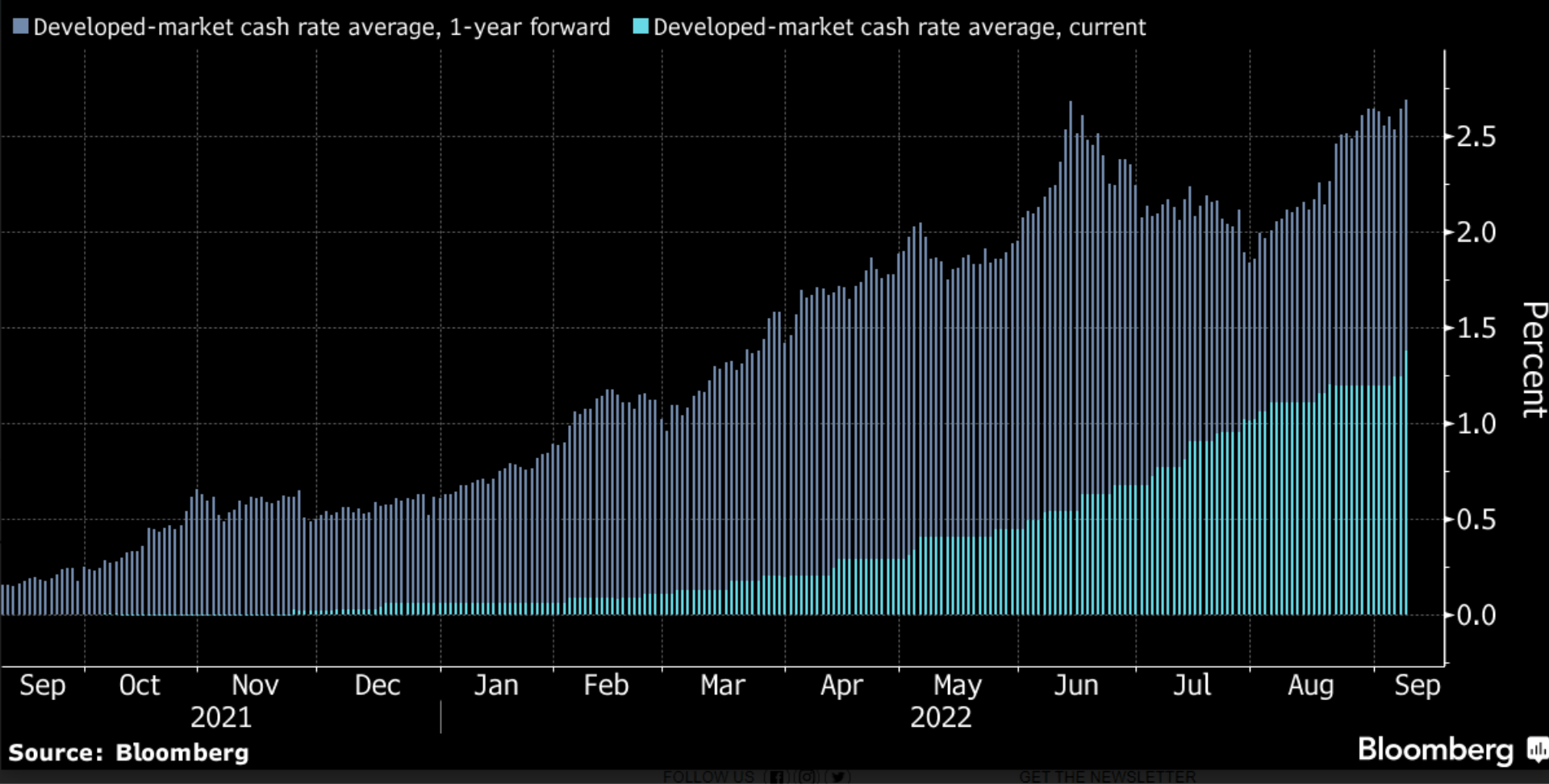 The northern hemispheres vacation has seen the dollar overtake the EURO, despite the announcement of a 0.75% tightening in the Eurozone. The relief rally was both fast and furious. Spoiler alert – it has since reversed! In other news from the continent, unlike the UK where more debt is to be issued to finance a cap on energy prices, oddly the European Central Bank is planning on ways to effectively tax the big energy companies. What will be interesting is to see how the mountains of excess liquidity behave even with such large and yes, unprecedented moves. What else should we be keeping an eye on? With so much going on, it would be easy to forget the need for reigning in concerns around peripheral nations and their cost of borrowing both relative to others, and on an outright basis as set out below. 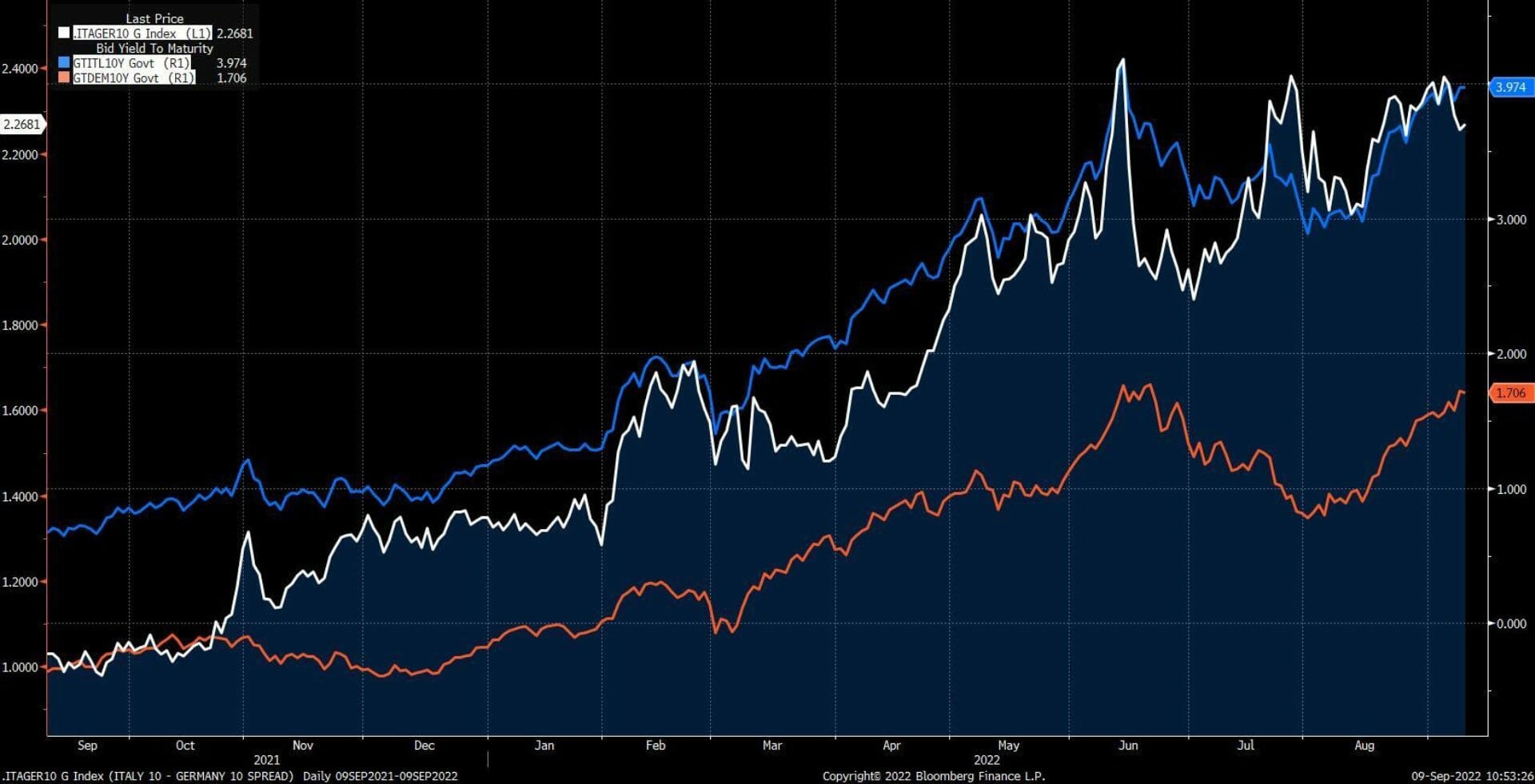 We also learnt that inflation since the last meeting is likely to be higher, and growth more sluggish, but for now at least, projected to remain positive. Optimistic springs to mind. Good thing they scrapped forward guidance.

Sterling has been a whirlwind. With what appeared to become the highest and stickiest inflation in town, queue Prime Minister Truss, armed with apparently unlimited buying power. Whilst in the short term I am sure we all welcome a tax cut, there is a price for everything and this one could and frankly should raise eyebrows and lower ratings of our beloved gilts. The below maps out the potential impact. The elephant on the graph here being the impact to government borrowing, the rate at which said monies comes, and the large and lasting impact for generations to come. 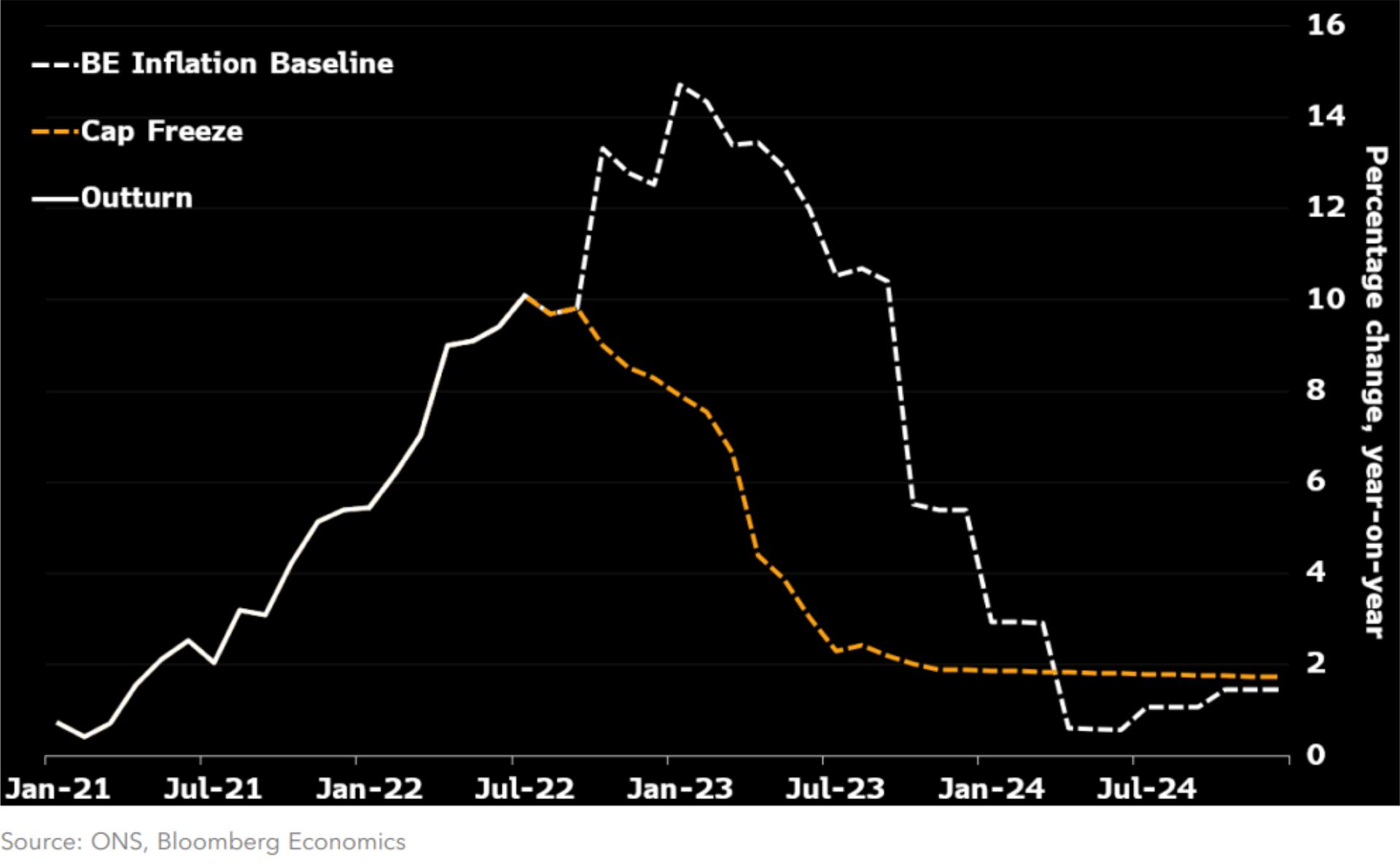 One could argue the additional borrowing to reduce the burden of higher energy prices will help stimulate the economy, with some commentators estimating the figure to exceed £100Bn in additional output. Further analysis is required though. What might this mean for the pound, and as an island that remains a net importer, both balance sheet and what might represent lower buying power as the currency war is in a full about turn, countries desperately attempting to strengthen their hand.

The Fed is continuing to successfully deliver $ king, taking a true cobra-kai no mercy attitude to inflation as though the word transitory never existed. Think we are getting close to the top or expectations are overdone? One could do worse than pay attention to Goldman Sachs, among others, revising estimates up this week for consecutive hikes of 75 and then 50 basis points at the next FOMC meetings, up 25 apiece. History teaches us many things. One such lesson – there are always losers on the way up. Over-leveraged, too reliant on cheap funding that was assumed to be around forever and without (credit) premium. Another potential canary in the coal mine? Puts on stocks outweigh calls in the world of options. What does this mean? Bets we see a drop the value of shares in the US (and beyond) drop are bigger than following the GFC…might be time to hang on to your hats.

With all of this there is of course still a silver lining. Holders of cash, seeking to maximize risk-adjusted returns are having a better time now than ever with rates not seen since the noughties and for the first time, in a single onboarding, enjoy access to over 450 products across five currencies, and counting.

Charting the ups and downs