This week among other things we take a look at the first round of bank earnings from the “Big 6” US financial institutions, stock market valuations, and movements in fixed income markets in core currencies as well as touching upon upcoming regulation in the money market fund sector.

As we move further into April, Q1 earning season enters full swing in usual fashion, with banks reporting on their performance since the beginning of the year. Often a good bellwether for the broader economy. In short, performance has been remarkable. Revenues were always expected to be up, but bank after bank beat expectations with revenue outperforming particularly strongly on the equity and fixed income trading desks of the Wall Street giants. Investment banking fees also surpassed those surveyed from both greater activity and larger deal sizes with valuations in stock markets now well beyond pre-pandemic highs, but also the rise of the SPAC (for more see the link below on one Hedge Fund’s take on the space) and a flurry of IPOs. 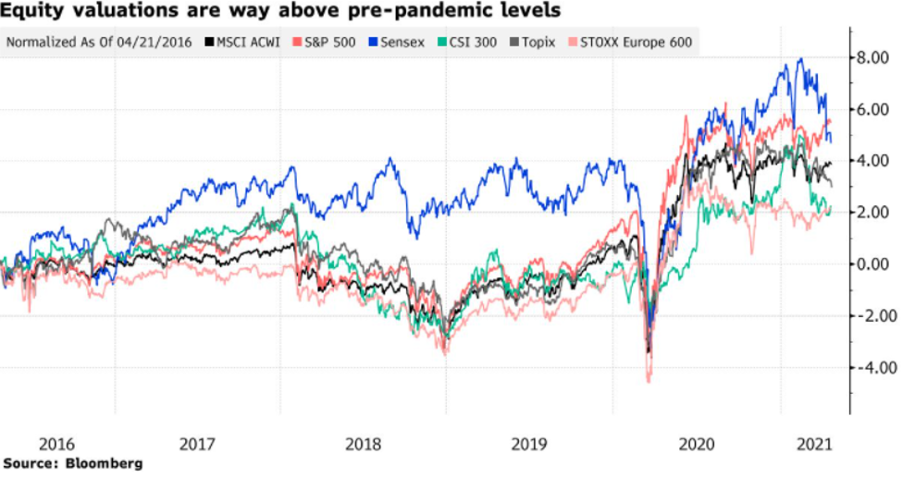 Another theme has also been the reduction in loan loss provisions as greater confidence in the perceived creditworthiness of counterparts has improved. The return of the buyback and dividends is also noteworthy, further highlighting positive sentiment in the sector.

One corner of financial markets that has seen significant losses which these earnings figures do not capture is leverage extended to the now defunked Archegos Capital. Much has been written and three weeks on losses have continued to mount. Prime brokers from a handful of the leading investment banks engaged in leveraged bets on individual stocks leading to outsized positions which once grossed up created rather large and thus painful exposures upon liquidation. By using derivatives contracts not only did the size of positions become huge, with the intention of making outsized returns, by avoiding building up a stock position also meant reporting and thus regulation around said positions went unnoticed. A stark reminder of how and where risk can pop up and, in some instances, cause sizable financial losses as well as reputational risk, along with difficult questions around governance.

The ECB announced its latest rates today and, as expected, it was a case of no news is good news for the Eurozone, as all major policy rates and actions were left unchanged. Since the beginning of the year the currency has weakened against other majors, while rate markets have moved upwards (think slightly less negative) with much of the action being driven by speed of vaccination programs and the ability of economies to reopen, or not, in some instances unfortunately.

Recent retail and employment data has been positive for the pound, with headline unemployment creeping lower to 4.9%. Job postings across sectors has bounced back with some parts of the economy suffering from a shortfall in supply of labour, particularly in the hospitality and manufacturing sectors as many workers have retooled, remain on furlough, or have returned to their home nations.

In markets, UK Treasury Bills continue to cheapen and whilst still rounding down to zero, they have consistently offered positive returns for the last several weeks across all three benchmark terms (1, 3 and 6 months). New data from the Federal Reserve has also shown that in the month of February the UK was in fact the largest buyer of US treasuries. 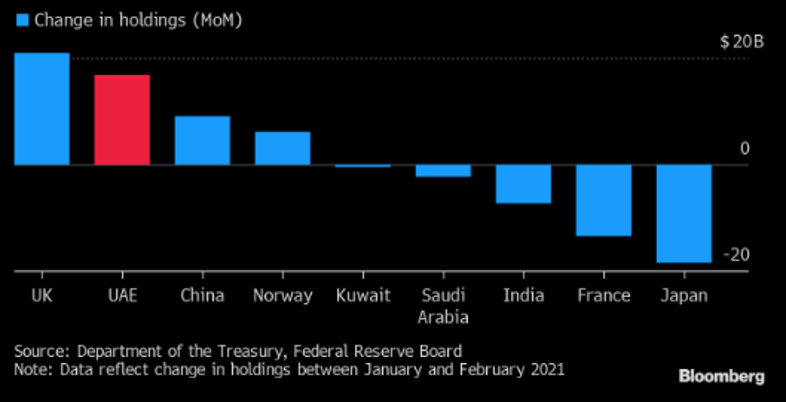 Whilst financial investors continue to improve their understanding and standardisation of what is deemed ESG, it was positive to see the British Government move the goalposts forward with a reduction of emissions by 80% to be completed by 2035. The team here is also working on products that are to be released over the coming quarters offering transparent and ESG compliant offerings in line with client demand and issuer interest.

In the US, the political scene whilst very different, remains similar in certain important areas. Foreign policy has been expected to soften towards China and others. What some of the headlines have been missing is actions taken against Russia in the form of additional sanctions , as well as a failed initial summit with China in Alaska. The bond market took note, with yields off the highs of the pandemic era, out of unison with stocks which are continuing to challenge recent records. The front end of the curve continues to be tested at 0.00% for both GC Repo and Government Bills, as reserve balances at the Central Bank swell. Futures tell a slightly different story, having crept higher, presumably on the back of expectations of adjustments to both the Federal Reserve’s repo facilities and the rate of interest it pays on excess bank reserves (IOER), as market rates continue to test the lower segment of the Fed’s target policy band.

Whilst this may provide some relief to the most active in the space, clouds are forming. “There’s a structural issue [with money market funds]. And we know this. And it really is time to address it decisively,” quoting none other than the Chairman of the Federal Reserve, Jerome Powell. Potential solutions to future-proof the sector and avoid a repeat of the moral hazard of bailouts are challenging – at one end of the spectrum, wholesale changes that protect financial stability would threaten the viability of the industry from the perspective of MMF providers, whilst at the other more minor amendments carry a whiff of re-arranging deckchairs on the titanic. One thing seems certain though, the Prime MMF industry (and its investors) should brace themselves for further changes in order to promote financial stability.

We are a UK-based financial technology company that delivers access to market-leading cash investment options, though an intuitive digital portal.