Charting the ups and downs

“The show must go on.” It doesn’t matter if most of us don’t like it. With inflation figures at record highs, a looming energy crisis and a high risk of recession, there are certainly plenty of things to worry about, and that’s without even mentioning the ongoing war in the Ukraine.

On a global scale, central banks have shifted into a higher gear. After some historic moves in June, including by the Swiss National Bank, July has not disappointed either. The Bank of Canada surprised the market by raising rates by 100bps, double that for Hungary after a similar-sized prior hike and last week the South African Reserve Bank also increasing its repo rate by 75bps in its steepest hike since 2002. And that’s just a few examples, globally close to 100 central banks have already moved rates this year at the time these words are put to paper.

There was one conspicuous outlier in the first half of the year… But that finally changed last week as we saw the European Central Bank join the global rate hike club, starting off with a 50bp bang and in doing so ending an 8-year era of negative interest rates. Having previously flagged a 25bps hike for the July meeting, the ECB seemed to wave goodbye to forward guidance, replacing it with a meeting-by-meeting approach, and driven by data. That said, the newly announced Transmission Protection Instrument (or TPI for lovers of acronyms), designed to protect indebted states in the Eurozone from rising borrowing costs, drew perhaps even more interest and attention from market commentators. After all, just a few hours before the ECB’s historic actions hit the wires, Italian Prime Minister Mario Draghi announced his resignation tossing the country into political turmoil (once again). According to the ECB at least, the TPI is to assist with liquidity conditions as opposed to underlying concerns around the ability to repay. This question of credit and the success of the TPI could have rather broad ramifications.

Against the backdrop of the ECB decision and the collapse of the Italian government coalition, Italian bonds sold off almost immediately, and with that the spread between Italian and German 10-year government bond yields – a closely watched benchmark for market stress – briefly widened to nearly two and a half percentage points. Interestingly/worryingly (depending on where you sit) for the first time since the Eurozone debt crisis, this also took the respective spread over German bond yields higher in the case of Italy than Greece, graphed out below. 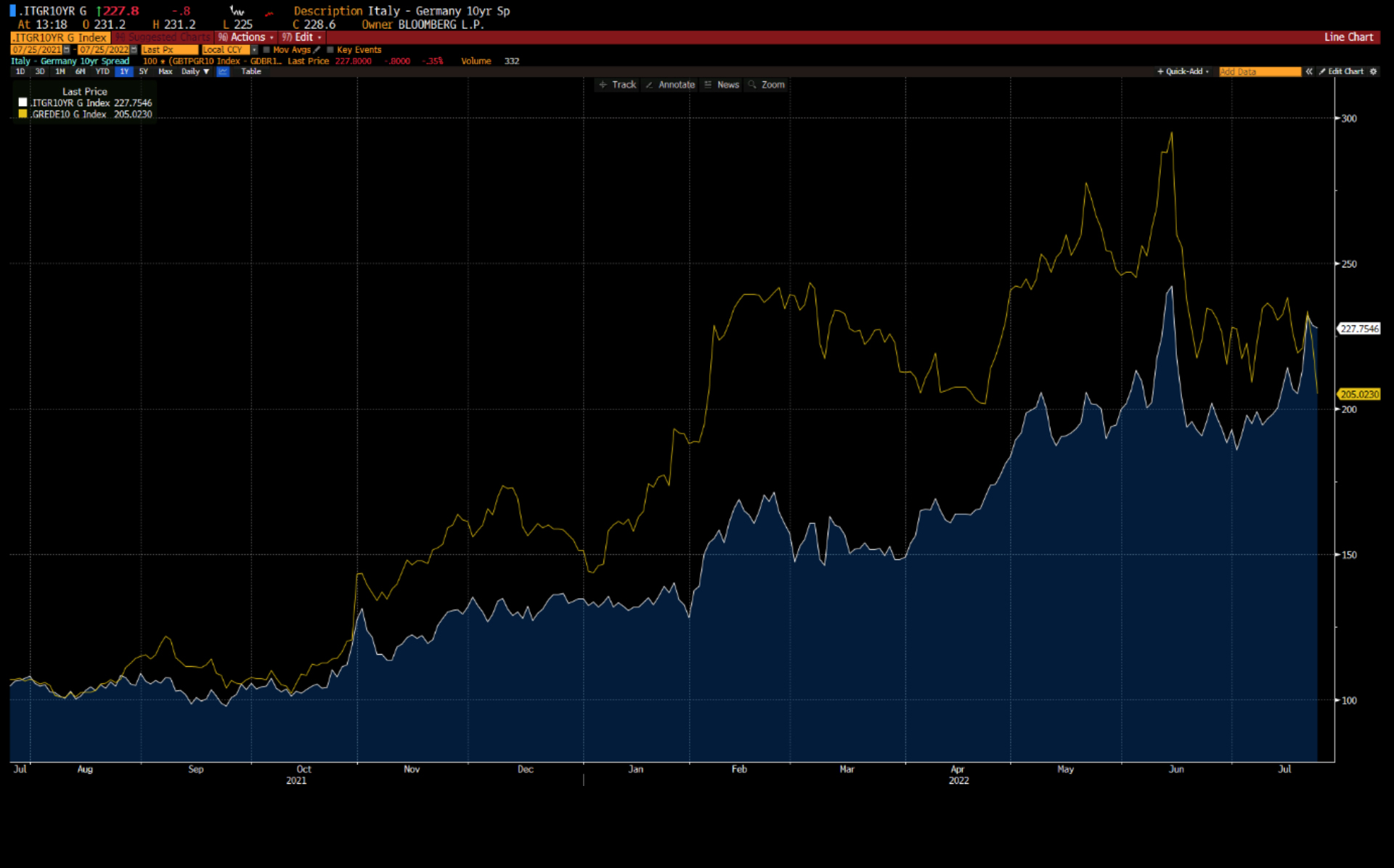 So, what’s next for the ‘Stivale’ (Italy)? Two things for certain: hard-fought upcoming elections and locking horns with the country’s debt amid rising interest rates. None of that is overly appealing. In line with other indebted countries in the bloc, Italy has tried to make the most of the negative-rate environment in recent years, with outright debt levels now only just off the all-time peak of €2.76 trillion in April (as per the Bank of Italy). Throw into the mix an average debt maturity profile of approximately seven years – lower than in 2010 – plus that the country is estimated to have completed just over half of its scheduled funding for this year by June (vs 68% for the same period last year), and you can understand why there is growing concern that the country’s finances might be in a bit of a pickle. Sadly, these may not be solely Italian problems. Certain other members of “Club Med” are also facing comparable debt-laden challenges, albeit to a lesser extent – the ECB will likely be keeping a close eye on bond spreads across the Southern reaches of the Eurozone over the coming months. With energy and Russian dependence hitting the headlines almost daily depending on whether pipelines require what seems like random “maintenance”, the colder months could well bring additional chaos and question what is “periphery” and whether there is still a “core” on the continent.

Probably everyone is tired of reading about inflation constantly, and these days I can’t help but think of the movie “Catch me if you can” with the likes of Leonardo DiCaprio and Tom Hanks. Certainly not a bad watch for days like last week for those of us residing in the UK (amongst others) when all one wants to do is cocoon in an airconditioned room. But, things aren’t yet getting any better, so continue to write about it we must…

US CPI headline in June came in at a four-decade high, rising 9.1% on an annual basis and 1.3% versus the prior month. So where does it end? If you listened to the Fed, inflation apparently had already peaked in May. Looking under the hood, it is the breadth of the price pressures that might be genuinely concerning. Whilst energy and to a slightly lesser extent food prices tend to steal the show, prices also remain elevated for other domestic goods and services, including shelter, apparel, rent and cars. Though a 75bps hike still seems to be the dominant view among money market traders for the upcoming Fed meeting, it is perhaps no surprise that some started placing their bets on a full percentage point increase, which would be a first for the Fed since the 1980s under Chair Volcker.

In other news, we have seen the six major US banks report Q2 financial results over the past two weeks. Some common themes emerged quickly: slumping profits, increased loan loss provisions and in some cases, even the pause of share buybacks. Outside of the financial world, there’s not a day another tech company announces a hiring freeze, rescinded offers, and layoffs, including the largest of them all such as Apple, Google parent Alphabet, Meta and Tesla.